Home
Products
About Us
Factory Tour
Quality Control
Contact Us

Thanks very much for your professional service and kind support during the project. Indair is really a excellent factory in clean room field and help us a lot in Pharma plant.

Much better products than others. The performance of HEPA filter is perfect. The quality is as same as AAF and comfil which we used before while with the better cost.

We wanted two decontamination container for a mine in Finland last year and thanks so much for INDAIR's professional suggestion to avoid the problems during the process. I would choose INDAIR next time!

HEPA filters are composed of a mat of randomly arranged fibres.[ The fibers are typically composed of fiberglass and possess diameters between 0.5 and 2.0 micrometers. Key factors affecting its functions are fibre diameter, filter thickness, and face velocity. The air space between HEPA filter fibers is typically much greater than 0.3 μm. The common assumption that a HEPA filter acts like a sieve where particles smaller than the largest opening can pass through is incorrect and impractical. Unlike membrane filters at this pore size, where particles as wide as the largest opening or distance between fibers can not pass in between them at all, HEPA filters are designed to target much smaller pollutants and particles. These particles are trapped (they stick to a fiber) through a combination of the following three mechanisms:

where particles following a line of flow in the air stream come within one radius of a fiber and adhere to it.

where larger particles are unable to avoid fibers by following the curving contours of the air stream and are forced to embed in one of them directly; this effect increases with diminishing fiber separation and higher air flow velocity.

an enhancing mechanism that is a result of the collision with gas molecules by the smallest particles, especially those below 0.1 µm in diameter, which are thereby impeded and delayed in their path through the filter; this behavior is similar to Brownian motion and raises the probability that a particle will be stopped by either of the two mechanisms above; this mechanism becomes dominant at lower air flow velocities.

Diffusion predominates below the 0.1 μm diameter particle size. Impaction and interception predominate above 0.4 μm.[7] In between, near the most penetrating particle size (MPPS) 0.21 μm, both diffusion and interception are comparatively inefficient.[8] Because this is the weakest point in the filter's performance, the HEPA specifications use the retention of particles near this size (0.3 μm) to classify the filter.[7] However it is possible for particles smaller than the MPPS to not have filtering efficiency greater than that of the MPPS. This is due to the fact that these particles can act as nucleation sites for mostly condensation and form particles near the MPPS.[8] 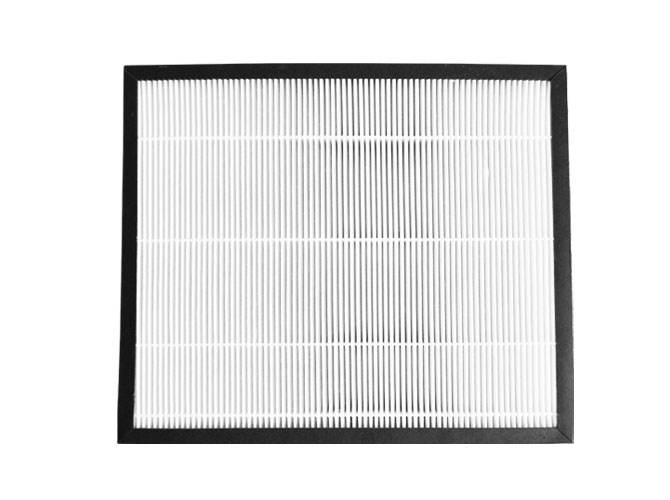